Dancers at Quyllurit’i, an indigenous festival in Peru 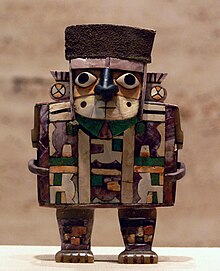 Indigenous peoples in Peru, or Native Peruvians, comprise a large number of distinct ethnic groups who have inhabited the country of Peru‘s territory since before its discovery by Europeans around 1500. Indigenous cultures developed here for thousands of years. The first Spanish explorers called the indigenous peoples of the Americas indios, or “Indians,” as they had been hoping to find the East Indies of Asia. The term is still used today, although it is sometimes thought to have a derogatory connotation.

At the time of the Spanish invasion, the indigenous peoples of the rain forest of the Amazon basin to the east of the Andes were mostly semi-nomadic tribes; they subsisted on hunting, fishing, gathering, and migrant agriculture. Those peoples living in the Andes and to the west were dominated by the Inca Empire, who had a complex, hierarchical civilization. It developed many cities, building major temples and monuments with techniques of highly skilled stonemasonry.

Many of the estimated 2000 nations and tribes present in 1500 died out as a consequence of the Spanish colonization of the Americas, largely because of exposure to new Eurasian infectious diseases endemic among the colonists, to which they had no acquired immunity.

Many survivors had unions with Spanish and their descendants were gradually assimilated into the general mestizo (“mixed race”) Peruvian population. All of the Peruvian indigenous groups, such as the Urarina, and even those who live isolated in the most remote areas of the Amazon rainforest, such as the Matsés, Matis, and Korubo, have changed their ways of life to some extent under the influence of European-Peruvian culture. They have adopted the use of firearms and other manufactured items, and trade goods at a remove from mainstream Peruvian society. These indigenous groups maintain cultural identities and practices that keep them distinct from majority Hispano-Peruvian society. 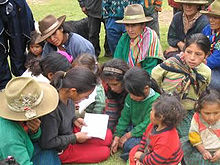