Pueblos indígenas or indígenas (lit. “indigenous peoples”) is a common term in Spanish-speaking countries, and pueblos nativos or nativos (lit. “native peoples” in the sense of descendants of non-immigrants) may also be heard, while aborigen (aborigine) is used in Argentina, and pueblos aborígenes (aboriginal peoples) is common in Chile. The term “Amerindian” (short for “‘Indians’ of the Americas)” is used in Quebec, the Guianas, and the English-speaking Caribbean.

Indigenous peoples are commonly known in Canada as Aboriginal peoples, which includes not only First Nations and Arctic Inuit, but also the minority population of First Nations-European mixed-race Métis people who identify culturally and ethnically with indigenous peoplehood. This is contrasted, for instance, to the American Indian-European mixed-race mestizos of Hispanic America (caboclos in Brazil) who, with their larger population (in most Latin American countries constituting either outright majorities, pluralities, or at the least large minorities), identify largely as a new ethnic group distinct from both Europeans and Indigenous Americans, but still considering themselves a subset of the European-derived Hispanic peoplehood in culture and ethnicity.

Tsuu T’ina children at a parade

Indigenous peoples of the United States are commonly known as Native Americans or American Indians, and Alaska Natives.

Application of the term “Indian” originated with Christopher Columbus, who, in his search for Asia, thought that he had arrived in the East Indies. Eventually, the Americas came to be known as the “West Indies“, a name still used to refer to the islands of the Caribbean Sea. This led to the blanket term “Indies” and “Indians” (Spanish “indios”) for the indigenous inhabitants, which implied some kind of racial or cultural unity among the indigenous peoples of the Americas. This unifying concept, codified in law, religion, and politics, was not originally accepted by the myriad groups of indigenous peoples themselves, but has since been embraced by many over the last two centuries.

Although some indigenous peoples of the Americas were traditionally hunter-gatherers—and many, especially in Amazonia, still are—many groups practiced aquaculture and agriculture. The impact of their agricultural endowment to the world is a testament to their time and work in reshaping and cultivating the flora indigenous to the Americas.

Although some societies depended heavily on agriculture, others practiced a mix of farming, hunting, and gathering. In some regions the indigenous peoples created monumental architecture, large-scale organized cities, chiefdoms, states, and empires.

Many parts of the Americas are still populated by indigenous peoples; some countries have sizable populations, especially Belize, Bolivia, Chile, Ecuador, Greenland, Guatemala, Mexico, and Peru. At least a thousand different indigenous languages are spoken in the Americas. Some, such as the Quechuan languages, Aymara, Guaraní, Mayan languages, and Nahuatl, count their speakers in millions. Many also maintain aspects of indigenous cultural practices to varying degrees, including religion, social organization, and subsistence practices. Like most cultures, over time, cultures specific to many indigenous peoples have evolved to incorporate traditional aspects, but also cater to modern needs. Some indigenous peoples still live in relative isolation from Western culture and a few are still counted as uncontacted peoples. 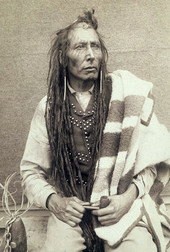 The First Nations (French: Premières Nations) are the predominant Aboriginal peoples of Canada south of the Arctic. Those in the Arctic area are distinct and known as Inuit. The Métis, another distinct ethnicity, developed after European contact and relations primarily between First Nations people and Europeans. There are currently 634 recognized First Nations governments or bands spread across Canada, roughly half of which are in the provinces of Ontario and British Columbia.

Within Canada, “First Nations” (most often used in the plural) has come into general use—replacing the deprecated term “Indians”—for the indigenous peoples of the Americas. Individuals using the term outside Canada include supporters of the Cascadian independence movement, as well as U.S. tribes within the Pacific Northwest. The singular, commonly used on culturally politicized reserves, is the term First Nations person (when gender-specific, First Nations man or First Nations woman). A more recent trend is for members of various nations to refer to themselves by their tribal or national identity only, e.g., “I’m Haida“, or “We’re Kwantlens“, in recognition of the distinctiveness of First Nations ethnicities.

North American indigenous peoples have cultures spanning thousands of years. Some of their oral traditions accurately describe historical events, such as the Cascadia Earthquake of 1700 and the 18th century Tseax Cone eruption. Written records began with the arrival of European explorers and colonists during the Age of Discovery, beginning in the late 15th century. European accounts by trappers, traders, explorers, and missionaries give important evidence of early contact culture.[10] In addition, archeological and anthropological research, as well as linguistics, have helped scholars piece together understanding of ancient cultures and historic peoples.

Although not without conflict or slavery, Euro-Canadians‘ early interactions with First Nations, Métis, and Inuit populations were less combative compared to the often violent battles between colonists and native peoples in the United States. Combined with later economic development, this relatively non-combative history has allowed First Nations peoples to have an influence on the national culture, while preserving their own identities.