The ethnic groups in Europe are the focus of European ethnology, the field of anthropology related to the various ethnic groups that reside in the nations of Europe. According to German monograph Minderheitenrechte in Europa co-edited by Pan and Pfeil (2002) there are 87 distinct peoples of Europe, of which 33 form the majority population in at least one sovereign state, while the remaining 54 constitute ethnic minorities. The total number of national minority populations in Europe is estimated at 105 million people, or 14% of 770 million Europeans.

There is no precise or universally accepted definition of the terms “ethnic group” or “nationality”. In the context of European ethnography in particular, the terms ethnic group, people (without nation state), nationality, national minority, ethnic minority, linguistic community, linguistic group, linguistic minority and genetic haplogroup are used as mostly synonymous, although preference may vary in usage with respect to the situation specific to the individual countries of Europe. 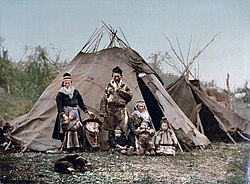 Most of Europe’s indigenous peoples, or ethnic groups known to have the earliest known historical connection to a particular region, have gone extinct or been absorbed by (or, perhaps, contributed to) the dominant cultures. Those that survive are largely confined to remote areas.

Groups that have been identified as indigenous include the Sami of northern Scandinavia, the Basques of northern Spain and southern France, the Bretons of western France and a many of the western indigenous peoples of Russia. Groups in Russia include Circassians of the northeastern Black Sea and the northwestern Caucasus (also indigenous to parts of Ukraine), Finno-Ugric peoples such as the Komi and Mordvins of the western Ural Mountains, northeastern Caucasus peoples of southwestern Russia, and Samoyedic peoples such as the Nenets people of northern Russia.

In Europe, present-day indigenous populations as recognized by the UN are relatively few. Nevertheless, the ethnic groups traditionally inhabiting most, if not all, European countries are considered to be indigenous to Europe. This includes the majority populations. It can lead to some confusion, because the term “indigenous” does not imply “non-white” or “minority” in Europe as it would in other continents where white people are non-indigenous.

One thought on “Indigenous People of Europe”