“Be aware of the idiot, for he is like an old dress. Every time you patch it, the wind will tear it back again. Wait and you will find out what you want to know.”

Arabic literature: literary works written in the Arabic language. The great body of Arabic literature includes works by Arabic speaking Turks, Persians, Syrians, Egyptians, Indians, Jews, and other Africans and Asians, as well as the Arabs themselves. The first significant Arabic literature was produced during the medieval golden age of lyric poetry, from the 4th to the 7th cent. The poems are strongly personal qasida, or odes, often very short, with some longer than 100 lines. They treat the life of the tribe and themes of love, fighting, courage, and the chase. The poet speaks directly, not romantically, of nature and the power of God. The qasida survive only through collections, chiefly the Muallaqat, Hamasa, Mufaddaliyat, and Kitab al-Aghani. The most esteemed of these poets are Amru al-Kais, Antarah Ibn Shaddād al-‘Absī, and Zuhair.

The structure of the Arabic language is well-suited to harmonious word-patterns, with elaborate rhymes and rhythms. The earliest known literature emerged in northern Arabia around 500 AD and took the form of poetry which was recited aloud, memorised and handed down from one generation to another. It began to be written down towards the end of the seventh century. The most celebrated poems of the pre-Islamic period were known as the mu’allaqat (“the suspended”), reputedly because they were considered sufficiently outstanding to be hung on the walls of the ka’ba in Makkah.

During the 19th century, printing in Arabic began in earnest, centered in Cairo, Beirut, and Damascus. Newspapers, encyclopedias, and books were published in which Arab writers tried to express, in Arabic, their sense of themselves and their place in the modern world. Simultaneously with a reaction against Western models in Arabic literature, the novel and the drama, forms never before used, developed. Notable 20th-century–early 21st-century writers in Arabic include the novelists Naguib Mahfouz, winner of the 1988 Nobel Prize in Literature, Abdelrahman Munif, Sonallah Ibrahim, and Yahya Hakki; the playwrights Ahmad Shawqi and Tawfiq al-Hakim; the poets Hafiz Ibrahim, Badr Shakir as-Sayyab, Nazik al-Malaika, Abdul Wahab al-Bayati, Mahmoud Darwish, and Adonis; and the short-story writers Mahmud Tymur and Yusuf Idris.

The Western center of Arab culture was Spain, especially Córdoba under the Umayyads. The Spanish Arabs produced fine poets and scholars, but they are less important than the great Spanish philosophers—Avempace, Averroës, and Ibn Tufayl. Since 1200 in Spain and 1300 in the East, there has been little Arabic literature of wide interest. The most outstanding Arabic writer of the 20th century was Naguib Mahfouz, a prolific Egyptian novelist, playwright, and screenwriter who won the Nobel Prize for literature in 1988. Other prominent writers from Egypt – which has long been the intellectual centre of the Arab world – include Taha Hussein, Tawfiq al-Hakim, Sayed Hafez, and M. Hussein Heikal.

What is Arabic Literature?

The origins of Arabic Literature in Africa go back almost forty years, though its inspiration originates even before that. The model for this was the celebrated multi-volume work by the German scholar Carl Brockelmann, Geschiche der arabischen Literatur: two original volumes (later revised and updated) and three supplementary volumes, all published in the 1930s and 1940s. These volumes cover the Arabic writing tradition from Morocco to India, with a total of 4,706 pages, but with only four pages referring to Arabic writings in sub-Saharan Africa.

Arabic belongs to the group of Semitic alphabetical scripts in which mainly the consonants are represented in writing, while the markings of vowels (using diacritics) is optional. The earliest-known alphabet to mankind was the North Semitic, which developed around 1700 B.C. in Palestine and Syria. It consisted of 22 consonant letters. The Arabic, Hebrew, and Phoenician alphabets were based on this model. Then, around 1000 B.C., the Phoenician alphabet was itself used as a model by the Greeks, who added letters for vowels.

There is a small remnant of pre-Islamic poetry, but Arabic literature predominantly emerges in the Middle Ages, during the Golden Age of Islam. Literary Arabic is derived from Classical Arabic, based on the language of the Quran as it was analyzed by Arabic grammarians beginning in the 8th century. A large portion of Arabic literature before the 20th century is in the form of poetry, and even prose from this period is either filled with snippets of poetry or is in the form of saj or rhymed prose. The ghazal or love poem had a long history being at times tender and chaste and at other times rather explicit. In the Sufi tradition the love poem would take on a wider, mystical and religious importance. Arabic epic literature was much less common than poetry, and presumably originates in oral tradition, written down from the 14th century or so. Maqama or rhymed prose is intermediate between poetry and prose, and also between fiction and non-fiction. Maqama was an incredibly popular form of Arabic literature, being one of the few forms which continued to be written during the decline of Arabic in the 17th and 18th centuries. 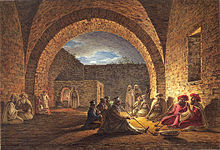 Arabic literature and culture declined significantly after the 13th century, to the benefit of Turkish and Persian. A modern revival took place beginning in the 19th century, alongside resistance against Ottoman rule. The literary revival is known as al-Nahda in Arabic, and was centered in Egypt and Lebanon. Two distinct trends can be found in the nahda period of revival. The first was a neo-classical movement which sought to rediscover the literary traditions of the past, and was influenced by traditional literary genres—such as the maqama—and works like One Thousand and One Nights. In contrast, a modernist movement began by translating Western modernist works—primarily novels—into Arabic.A tradition of modern Arabic poetry was established by writers such as Francis Marrash, Ahmad Shawqi and Hafiz Ibrahim. Iraqi poet Badr Shakir al-Sayyab is considered to be the originator of free verse in Arabic poetry.