Adivasi (Hindi: आदिवासी, IPA: [aːd̪ɪˈʋaːsi]) are the tribal groups considered the Indigenous people population of South Asia.[1][2][3] Adivasi make up 8.6% of India‘s population or 104 million, according to the 2011 census, and a large percentage of the Nepalese population.[4][5][6] They comprise a substantial indigenous minority of the population of India and Nepal. The same term Adivasi is used for the ethnic minorities of Bangladesh, Pakistan, the native Tharu people of Nepal, and also the native Vedda people of Sri Lanka (Sinhalese: ආදී වාස).[7][8] The word is also used in the same sense in Nepal, as is another word, janajati (Nepali: जनजाति; janajāti), although the political context differed historically under the Shah and Rana dynasties.

Adivasi societies are particularly prominent in Andhra Pradesh, Chhattisgarh, Gujarat, Jharkhand, Madhya Pradesh, Maharashtra, Odisha, Rajasthan, Tamil Nadu, West Bengal and some north-eastern states, and the Andaman and Nicobar Islands. Many smaller tribal groups are quite sensitive to ecological degradation caused by modernisation. Both commercial forestry and intensive agriculture have proved destructive to the forests that had endured swidden agriculture for many centuries.[9] Adivasis in central part of India have been victims of the Salwa Judum campaign by the Government against the Naxalite insurgency.

The Tribals Of India: Aboriginal Peoples Without Land

The “tribals” (also known as the Adivasi) are India’s original indigenous people — they are spread out all across the subcontinent and number some 700 distinct tribes, according to the Constitution. The Adivasis are believed to account for about 10 percent of India’s total enormous population.

More than half of the tribal population resides in six states: Madhya Pradesh, Chhattisgarh, Maharashtra, Orissa, Jharkhand and Gujarat. The Northeast of India has a particularly heavy tribal element. These ancient aboriginal peoples tend to live in isolated communities in hills and forestlands, far from urban centers.

While their ancient history is largely a point of conjecture, scholars generally believe that when Indo-Aryans invaded what is now India at least 3,000 years ago, they pushed these aboriginal peoples into more remote parts of the country, where they have largely remained to this very day.

As such, many tribal communities remained far outside India’s mainstream and became self-governing entities (and, importantly, fell outside of the rigid Hindu caste stricture; although some Adivasis intermarried with the “invaders”).

Adivasis are classified as “Scheduled Tribes” by the Indian Constitution, although this definition differs from state to state. Tribals are also distinct from the Dalits (the Untouchables), who are largely trapped in bonded servitude.

However, the Adivasis have also suffered greatly in India as the nation moves headlong into becoming a modern economic superpower. Their land and ancient customs have come under dire threat from the inexorable forces of progress. They also endure discrimination, prejudice and displacement, despite the fact that the Constitution guarantees them many rights.

Tribal lands (once protected by government decree) have been illegally seized and occupied by outsiders (and now by corporations) for decades.

The aboriginal ethnic groups of India are called “scheduled tribes” in the Constitution. The designation, invented by the British, covers somewhat arbitrarily 255 such communities. According to the 1971 census the total population of India was 547,949,809, of which the scheduled tribes accounted for 38,015,162, or nearly 7% of the population. Although by now the national population has increased by another 135 million, the proportion probably remains close to what it was 10 years ago. Unevenly distributed throughout the subcontinent, the tribespeople are a vast majority in the northeastern states and Union territories: 88% in Nagaland, 80% in Meghalaya, and 70% in Arunachal Pradesh. Half of the country’s tribal population is found in the three states of Madhya Pradesh, Bihar, and Orissa. Madhya Pradesh has over 8 million, that is, 20% of the population; Bihar has about 5 million, or 8075% of the population; Orissa has nearly 7 million.

The numerically dominant tribes are four million Gonds of Central India (Madhya Pradesh, Maharashtra, and Andhra Pradesh), four million Bhils of Western India (Rajasthan and Gujarat), and three million Santals of Eastern India (Bihar, Orissa, and West Bengal). The smallest tribal community is the Andamanese, with a population of 19. 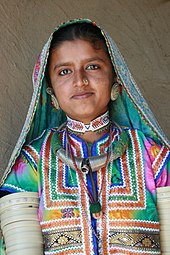 Women of Banni tribe in traditional attire from Gujarat