Native Indonesians or Pribumi, literally “sons of the land“, is the population group in Indonesia that shares a similar sociocultural and ethnic heritage whose members are considered natives of the country.The term native Indonesians should not be confused with the more generic term Indonesians or Indonesian citizen, the latter might apply to a larger demographic group which include ethnicities of foreign origin, such as Chinese Indonesians.

Translated from inlander in Dutch, the term was first coined by the Dutch colonial administration to lump diverse groups of local inhabitants of Indonesia’s archipelago, mostly for social discrimination purposes. During the colonial period, the Dutch instilled a regime of three-level racial separation; the first class race being Europeans; the second class race being those of partial European ancestry as well as “Foreign Orientals” (Vreemde Oosterlingen) which includes Chinese, Arabs, and Indians; and the third class race being the natives (Inlanders), including Javanese, Malays, Dayaks, Papuans and Moluccans. The colonial system was similar to the caste system in Hispanic America, or the South African apartheid system, which prohibited inter-racial neighborhoods (wet van wijkenstelsel) and inter-racial interactions were limited by passenstelsel laws. 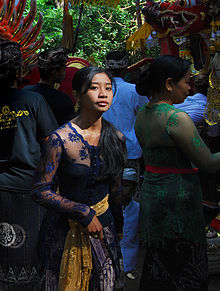