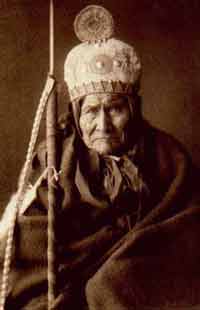 Geronimo – His Own Story

“I was warmed by the sun, rocked by the winds and sheltered by the trees as other Indian babes. I was living peaceably when people began to speak bad of me. Now I can eat well, sleep well and be glad. I can go everywhere with a good feeling.

The soldiers never explained to the government when an Indian was wronged, but reported the misdeeds of the Indians. We took an oath not to do any wrong to each other or to scheme against each other.

I cannot think that we are useless or God would not have created us. There is one God looking down on us all. We are all the children of one God. The sun, the darkness, the winds are all listening to what we have to say.

When a child, my mother taught me to kneel and pray to Usen for strength, health, wisdom and protection. Sometimes we prayed in silence, sometimes each one prayed aloud; sometimes an aged person prayed for all of us… and to Usen.

I was born on the prairies where the wind blew free and there was nothing to break the light of the sun. I was born where there were no enclosures.”

Geronimo {jur-ahn’-i-moh}, or Goyathlay (“one who yawns”), was born in 1829 in what is today western New Mexico, but was then still Mexican territory. He was a Bedonkohe Apache (grandson of Mahko) by birth and a Net’na during his youth and early manhood. His wife, Juh, Geronimo’s cousin Ishton, and Asa Daklugie were members of the Nednhi band of the Chiricahua Apache.

He was reportedly given the name Geronimo by Mexican soldiers, although few agree as to why. As leader of the Apaches at Arispe in Sonora, he performed such daring feats that the Mexicans singled him out with the sobriquet Geronimo (Spanish for “Jerome”). Some attributed his numerous raiding successes to powers conferred by supernatural beings, including a reputed invulnerability to bullets.

Geronimo’s war career was linked with that of his brother-in-law, Juh, a Chiricahua chief. Although he was not a hereditary leader, Geronimo appeared so to outsiders because he often acted as spokesman for Juh, who had a speech impediment.

Geronimo was the leader of the last American Indian fighting force formally to capitulate to the United States. Because he fought against such daunting odds and held out the longest, he became the most famous Apache of all. To the pioneers and settlers of Arizona and New Mexico, he was a bloody-handed murderer and this image endured until the second half of this century.

To the Apaches, Geronimo embodied the very essence of the Apache values, agressiveness, courage in the face of difficulty. These qualities inspired fear in the settlers of Arizona and New Mexico. The Chiricahuas were mostly migratory following the seasons, hunting and farming. When food was scarce, it was the custom to raid neighboring tribes. Raids and vengeance were an honorable way of life among the tribes of this region.

By the time American settlers began arriving in the area, the Spanish had become entrenched in the area. They were always looking for Indian slaves and Christian converts. One of the most pivotal moments in Geronimo’s life was in 1858 when he returned home from a trading excursion into Mexico. He found his wife, his mother and his three young children murdered by Spanish troops from Mexico. This reportedly caused him to have such a hatred of the whites that he vowed to kill as many as he could. From that day on he took every opportunity he could to terrorize Mexican settlements and soon after this incident he received his power, which came to him in visions. Geronimo was never a chief, but a medicine man, a seer and a spiritual and intellectual leader both in and out of battle. The Apache chiefs depended on his wisdom.

When the Chiricahua were forcibly removed (1876) to arid land at San Carlos, in eastern Arizona, Geronimo fled with a band of followers into Mexico. He was soon arrested and returned to the new reservation. For the remainder of the 1870s, he and Juh led a quiet life on the reservation, but with the slaying of an Apache prophet in 1881, they returned to full-time activities from a secret camp in the Sierra Madre Mountains.

In 1875 all Apaches west of the Rio Grande were ordered to the San Carlos Reservation. Geronimo escaped from the reservation three times and although he surrendered, he always managed to avoid capture. In 1876, the U.S. Army tried to move the Chiricahuas onto a reservation, but Geronimo fled to Mexico eluding the troops for over a decade. Sensationalized press reports exaggerated Geronimo’s activities, making him the most feared and infamous Apache. The last few months of the campaign required over 5,000 soldiers, one-quarter of the entire Army, and 500 scouts, and perhaps up to 3,000 Mexican soldiers to track down Geronimo and his band.

In May 1882, Apache scouts working for the U.S. army surprised Geronimo in his mountain sanctuary, and he agreed to return with his people to the reservation. After a year of farming, the sudden arrest and imprisonment of the Apache warrior Ka-ya-ten-nae, together with rumors of impending trials and hangings, prompted Geronimo to flee on May 17, 1885, with 35 warriors and 109 women, children and youths. In January 1886, Apache scouts penetrated Juh’s seemingly impregnable hideout. This action induced Geronimo to surrender (Mar. 25, 1886) to Gen. George CROOK. Geronimo later fled but finally surrendered to Gen. Nelson MILES on Sept. 4, 1886. The government breached its agreement and transported Geronimo and nearly 450 Apache men, women, and children to Florida for confinement in Forts Marion and Pickens. In 1894 they were removed to Fort Sill in Oklahoma. Geronimo became a rancher, appeared (1904) at the Louisiana Purchase Exposition in St. Louis, sold Geronimo souvenirs, and rode in President Theodore Roosevelt’s 1905 inaugural parade.

Geronimo’s final surrender in 1886 was the last significant Indian guerrilla action in the United States. At the end, his group consisted of only 16 warriors, 12 women, and 6 children. Upon their surrender, Geronimo and over 300 of his fellow Chiricahuas were shipped to Fort Marion, Florida. One year later many of them were relocated to the Mt. Vernon barracks in Alabama, where about one quarter died from tuberculosis and other diseases. Geronimo died on Feb. 17, 1909, a prisoner of war, unable to return to his homeland. He was buried in the Apache cemetery at:

“The song that I will sing is an old song, so old that none knows who made it. It has been handed down through generations and was taught to me when I was but a little lad. It is now my own song. It belongs to me. This is a holy song (medicine-song), and great is its power. The song tells how, as I sing, I go through the air to a holy place where Yusun (The Supreme Being) will give me power to do wonderful things. I am surrounded by little clouds, and as I go through the air I change, becoming spirit only.

Geronimo’s changed form is symbolized by a circle, and this is surrounded by a mystic aureole. The holy place is symbolized by the sun, which is decorated with a horned head-dress emblematic of divine power. This is the insignia of the Holy Man. 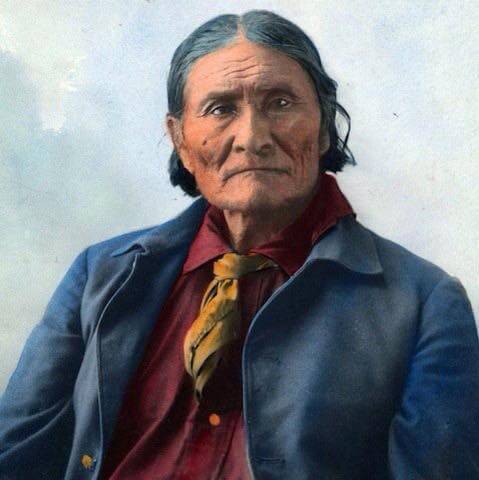 “Geronimo is said to have had magical powers. He could see into the future, walk without creating footprints and even hold off the dawn to protect his own. This Apache Indian warrior and his band of 37 followers defied federal authority for more than 25 years.

“GERONIMO AND THE APACHE RESISTANCE” weaves dramatic scenery, memoirs, letters, photographs and other original documents into a portrayal of the life of the people of the southwest in the 19th century.” 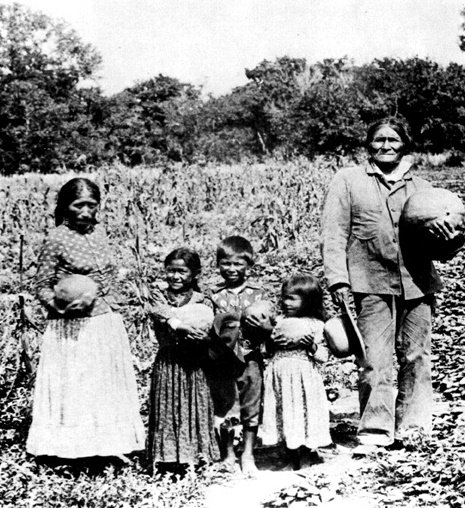 Pictures and Home Pages About Geronimo 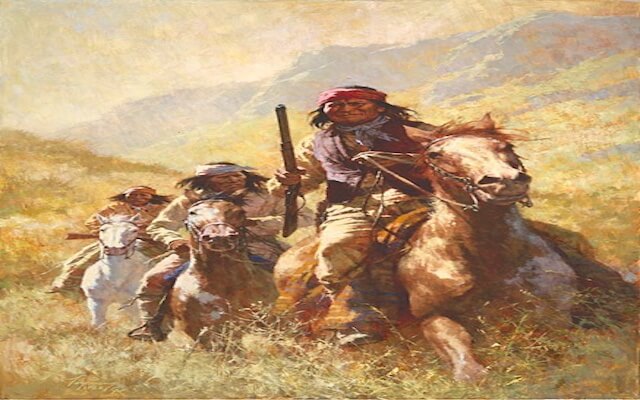 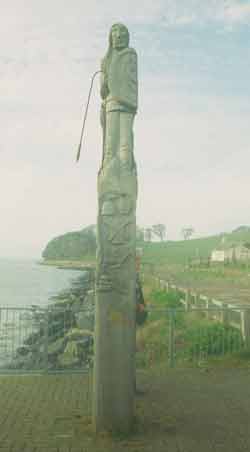 The Fisherman returned.
It was time to dock the Trawlers.
Irish sea was strong and without fish.

Oh we can’t sell you fish said the people repairing boats in the dock.
The deep freeze units of prawns were empty too.
The seals were wondering around in the break waters,
Looking for hardly any leftovers of Mosul’s Squids from the nets.

Small bites to fill the belly of any kind.
Click Click My camera made a sound
And we all gathered around sharing greetings.

Come back the next time Portavogie Residents were saying.
Global warming is also a way of life here.
Go instead and pay respect to a sculpture on the other side of the Island.

Bidding farewell to the traveller of time, there alone he stands
We Irish have a name for him.
We call him Geronimo
Of the last Indian to leave our soil of Ireland of distant Immigrants.

We erected him to commemmorate
The memory for what he stood for.
His replica in wood closer to the soil
So he welcomes or Bids farewells to us all.

Regardless of our color or creed
It all depends whose journey you are on.
The seen ones or the unseen ones.