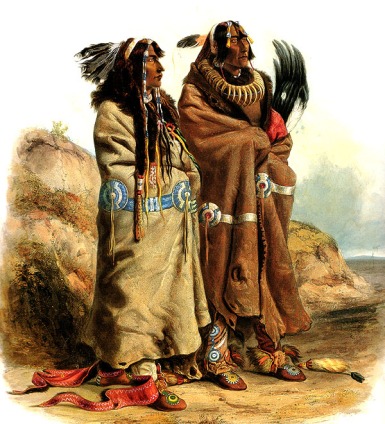 Since 1700 the Mandan tribe maintained their camp in North Dakota, where they belonged to the Siouan linguistic family. Mandans lived at a strategic point on the Missouri River between Heart River and the Little Missouri Rivers, N.D. Their traditions resemble those of more eastern tribes. They became historically famous when Captains Lewis and Clark chose the site of Mandan settlement to build their first winter camp of 1804-05. There Captain Lewis hired Sacagawea and her husband Charbonneau to join the expedition as interpreters. Sacagawea was Shoshone and was able to get horses from the Shoshones to cross the Rocky Mountains. Later, in 1806, the explorers arrived at the Mandan village on their return from the Pacific Ocean. In 1837, the Mandans were nearly wiped out by smallpox, and later moved to Fort Berthold, N.D.

Not too long ago, the buffalo was the principal source of food and clothing for the Mandan Indian tribe.

For these reasons, each year their tribe held a festival to honour the buffalo. It became the chief celebration, a feast for all, marking the time for the buffalo’s return. The buffalo- hunting season followed. 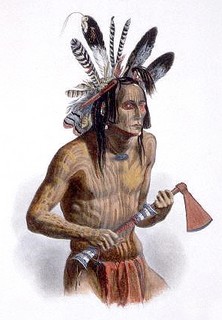 The most exciting event of the year’s festival was the Buffalo Dance. Eight men participated, wearing buffalo skins on their backs and painting themselves black, red, and white. Dancers endeavoured to imitate the buffalo on the prairie.

Each dancer held a rattle in his right hand, and in his left a six-foot rod. On his head, he wore a bunch of green willow boughs. The season for the return of the buffalo coincided with the willow trees in full leaf.

Another dance required only four tribesmen, representing the four main directions of the compass from which the buffalo might come. With a canoe in the centre, two dancers, dressed as grizzly bears who might attack the hunters, took their places on each side. They growled and threatened to spring upon anyone who might interfere with the ceremony.

Onlookers tried to appease the grizzlies by tossing food to them. The two dancers would pounce upon the food, carrying it away to the prairie as possible lures for the coming of the buffaloes.

During the ceremony, the old men of the tribe beat upon drums and chanted prayers for successful buffalo hunting.

By the end of the fourth day of the Buffalo Dance, a man entered the camp disguised as the evil spirit of famine. Immediately he was driven away by shouts and stone-throwing from the younger Mandans, who waited excitedly to participate in the ceremony.

When the demon of famine was successfully driven away, the entire tribe joined in the bountiful thanksgiving feast, symbolic of the early return of buffalo to the Mandan hunting-grounds.